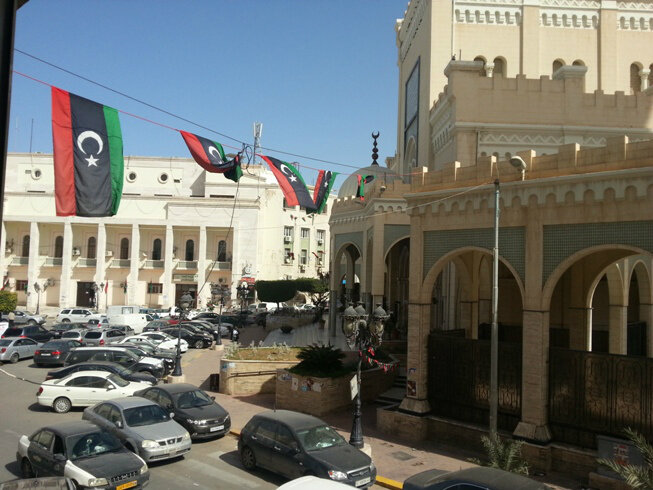 Are things in Libya really getting better? That’s a question I’m sure most people here ask themselves constantly. The honest answer is that it’s very hard to be sure.

There’s always plenty of evidence for the pessimists.

Even in Tripoli, the recent attempt on President Magarief and the assault on the offices of Alassema TV, as well as numerous other incidents, continue to highlight the precarious security situation. These acts of violence also highlight, as if it were necessary, how far this country needs to travel before we have a society that fully respects the fundamental tenants of democracy, freedom of speech and a free press.

The situation in many areas outside of Tripoli, from what I hear, is frequently worse.

Despite this, my view remains that in general things continue to move in the right direction. The State, at least in Tripoli, is seemingly beginning to establish itself. Recently, our car was stopped by unarmed police (the guns were in their car, of course) and our driver fined for using his cell phone. His reaction was one of delight.

Finally, a policeman was out on the streets doing his job.

The police, in fact, have become a lot more visible at road junctions across Tripoli, helping the maddening traffic to move at a crawl rather than grind to complete standstill. None of them seem to be visibly armed.

Anti militia demonstrations in the city have also helped to embolden the Government in its dealings with armed groups. The tone is much more forthright and is more frequently being backed up by action.

If the State is gaining strength, that brings with it the growing risk of all out confrontation with those militias who refuse to give up the power their arsenals provide them.

Every six months, we sit around saying that the next six months are crucial.

But, I believe the next six months really will be crucial. Either the militias will back down and disband, or fully integrate with the State’s security services, or the Government will back down, or we’ll have a fight on our hands. Of course, only one of those outcomes is positive.

Meanwhile, people are trying to make a living. It’s been another interesting, even exciting, month at the office. There have been a number of tenders [Ed: basically RFPs] for integrated marketing communications services to which we have responded. That, in itself, has been a challenge. Clients’ lack of experience in managing an open tender process means that requirements, time frames, and budgets often don’t fully add up.

There is also little appreciation of the strategic function of marketing and public relations, which results in an unwillingness to devote time and resources to thinking and planning.

Developing a brand identity, writing brand guidelines, or developing a message matrix seem like a waste of time when you could be plastering town with your ads now.

And with so much pent up demand, maybe for now you don’t really need much of a strategy. But, our hope is, of course, that the market becomes more competitive as more Libyan and international businesses become active and consumers more sophisticated. That means we must help clients not only to make the best of things now, but also think about a future when marketing strategy will be an element in determining the long term success of their business.

At this point, whether anything we do is strategic or not, the fact that clients are willing to invest in marketing and communications is evidence enough that confidence in the market continues to stabilize.