Social Media: Being Communicators of Change

I’m reminded of this fact when people call me up to talk about how they can (best) use Twitter.

The common denominator between Twitterers and non-Twitterers is usually the knowledge that Twitter exists and that tweets are limited to 140 characters.

At the mention of DMs, RTs and hashtags the phone line goes quiet. There is a lot of educating to be done.

Why do I start on a seemingly negative point? Let’s sit back for a minute or two, look around us, and consider who we’re working with

and how we must act as educators in the subject of social media.

As a junior NHS communicator and member of Generation Y, I am told that my work is to change things, to improve on the old, and shine a light on the huge potential that professional communicators bring to the NHS.

I’m pumped up on motivation, education and a feeling of opportunity, in a world where jobs and a career are ever harder to find. It is a dangerous, volatile mix.

Were I to take the hype at face value I would risk alienating my colleagues in a hailstorm of young buck arrogance.

However, if I don’t challenge the current system with the all powerful “why,” I could waste an opportunity to help staff put communications at the center of what they do, ultimately improving the public’s experience of the NHS.

Out of this careful balancing act between naÃ¯ve arrogance and passive acceptance, #nhssm was born.

It brings together NHS communications professionals who use social media and want the NHS to realise the potential it brings to increase the level of service we offer.

As you will see from the video below, #nhssm is now evolving into something with an offline presence, taking what we are learning each Monday from 12 noon GMT to a wider audience;

Behaviour change at its best without breaching confidentiality.

While the case studies, lessons and “in-their-spare-time” motivated #nhssm teachers are all out there, social media in the NHS is still only seen as an add-on, a nice to do.

As Tim Lloyd, Department of Health Deputy Head of Digital Communications (tweeting in a personal capacity), quite rightly tweeted: 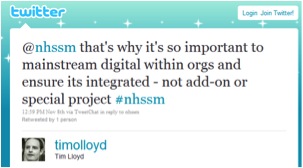 To get social media use into the mainstream we need to educate our colleagues. This applies to all sectors.

If the audience is skeptical, I see my job as a professional communicator to be one of challenging that skepticism, providing the evidence for social media as a useful tool in an NHS communicator’s toolbox.

There are always two sides to every advance in communications. Without communicators educating each other and subsequently all NHS staff about the positives of social media, we risk the NHS only hearing the negative side.

Are you, as a professional communicator, taking your role as an educator seriously?

As Gemma Went quite rightly wrote, we in social media must remember that the majority of people are not yet at our level of uptake. As professional communicators we must remember our training and intuition for seeing the bigger picture.

We mustn’t become so infatuated that we blindly promote social media from only our point of view. We must understand, confront and openly discuss opposition to social media use (in and outside of health care).

It is only with this collaborative approach that we can win the trust of and begin to educate our colleagues, line managers and directors.

By bringing our colleagues with us and not leaving them in our wake, we can avoid the classic breakdown in communications between supporters and detractors… helping us be the communicators of internal change.

#nhssm has taught me a lot about managing resistance to change. Have social media projects you’ve worked on also required you to educate your (internal or external) client? Do you see being an educator as part of your professional communicator role? It’d be great to hear if others disagree or agree with me on the other side of the pond!

More: Bryce Keane originally brought Alex and his efforts to my attention in his first guest post on the NHS’ social media efforts.

Alex Talbott graduated from the University of Leicester in 2009 with a first in Biological Sciences. He is part of the first-ever NHS Communications Graduate Training Scheme, which includes studying for a post-graduate Diploma in Strategic Communications at Leeds Metropolitan University. Alex founded the #nhssm tweet chat and has now handed over the reins to Tim Lloyd and Colin Wren, as he moves to a hospital which ironically blanket bans access to social media. You can catch all the #nhssm action at @nhssm and its accompanying Posterous blog. In his spare time Alex plays Ultimate Frisbee, occasionally attempts to practice his German and enjoys sampling real ales.