The Danger Of Doing Business Vicariously 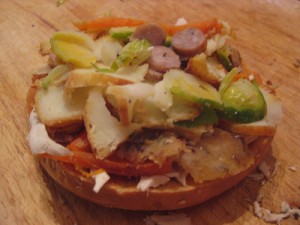 I had a colleague who was very “size” conscious. She wasn’t at an unhealthy weight, but she ate huge amounts of leafy greens every day because she wanted to avoid putting on an extra ounce.

We favored a high-end grocery nearby for lunch, and I stood on line countless times behind her, loading my lunch onto the conveyer belt behind her half-pound of lettuce, cherry tomatoes, and edamames from the salad bar.

Then I would sit across from her and watch as she ate it all – cheer her on, even. She meant well, and was doing good things for her body.

I’ve no doubt it was very good for her.

At home, though, I stopped eating salad (which I only did minimally to been to begin with). She ate enough of it for me for a year within something like three weeks. I’d lived the experience vicariously through her, and I was stuffed.

The problem was, it was totally psychosomatic.

I hadn’t eaten a bite of the green stuff – was avoiding it, in fact – and was thus missing out on a ton (I’m not kidding about how much she ate!) of beneficial nutrition.

Anybody stuffed to bursting

with tips from within and outside your community on how to use Google Plus? No? How about Pinterest? Thought so. But that’s not all that’s out there to keep you busy.

You’ve been watching people’s new websites pop up, following along as they record their journey to stay hip to the social media happenin’s, finding new opinions and angles about whether or not a particular strategy is worth your time…

And all along you’re thinking, I need to stop procrastinating and get on this, it’s crucial to my business growth and development.

The truth is, you’re not procrastinating.

It’s just become too difficult for you to get motivated because you’re currently bearing the same mental weight on your shoulders as you would if you’d done it all already. And it was exhausting.

Since this is such a different phenomenon than procrastination – even though it manifests the same symptoms (to get all clinical on you) – it has to be dealt with a little differently than the usual motivating pap.

Try looking at yourself from a stranger’s eyes – preferably an uncharitable stranger.

What would they think of your current operations or business front – either online or offline? The things that turn them off have to be dealt with immediately, or that flat line of traffic has no place to go but down.

Step away for a while.

All writers favor this masochistic but essential magic trick, which is to step away from what we’ve written and then come back to find all the surprising and embarrassing gaffes we’ve made. Do the same with your business.

Take a break for a couple of days and do what you have to do to keep your brain occupied with something else.

When you come back and notice the fact that although you know all there is to know about how to set up an email marketing strategy – and may have even blogged about it –  you don’t have one yourself, you’ll be quick to start getting it together before anyone else notices… like that uncharitable stranger.

Know this: that weight you’ve got on your shoulders shouldn’t be there.

The people around you who’ve made so much progress in their businesses and lives don’t have that nagging feeling making them feel a hundred pounds heavier, because they’ve put it to good use and moved on.