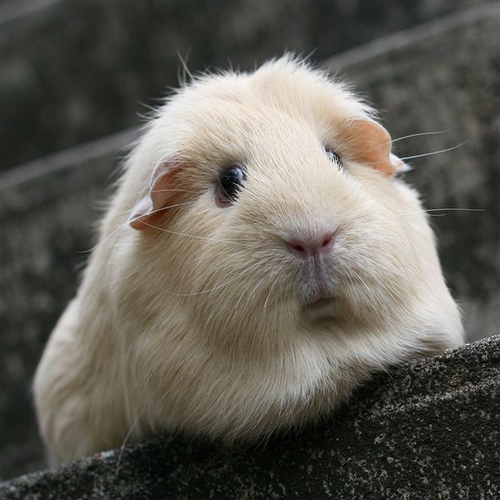 As a rule I like to channel my inner bitterness into lengthy rants about social media transgression. If necessary, I will illustrate by making disparaging remarks about Justin Bieber or Snooki.

Today I am filled, not with howler monkey angst, but guinea pig worry.

Guinea pig worry is the feeling one gets when being judged by a furry little critter and found wanting. These moments can be very unsettling for both the human and the guinea pig.

A friend, whom I have introduced to Twitter, sends me emails with questions about various Twitter tools. Most of them are designed to help a person accumulate a mass of worthless followers, so as to build a false sense of self worth. Some of them are designed to allow one to tweet at all hours of the day, thus promoting one’s awesomeness, even when one is not on the computer.

I don’t schedule tweets, but I don’t condemn those who do. My feeling on scheduling tweets is that if one is well established as an opinion leader, with a massive (legitimate) following, then it is a necessity, because her followers want to be informed.

When someone who is starting on Twitter or doesn’t have much of a network uses them, it tells me several things about them. In no particular order:

7. They aren’t serious about building a strong social network. In a recent study by a group of people (mostly single) with pocket protectors, high incomes, and excellent gaming skills, it was determined that “social media” requires one to be … I believe the scientific term they used was …”social.”

A. They have not read any of my posts about “blocking followers,” why having “follow me I will follow you” in your bio is worse than being a militant terrorist child molester with questionable personal hygiene, or perhaps they are just uniformed.  (In the future I will send them a link to this post to aid in their recovery. I am helpful that way.)

3b. They mistakenly think that tweeting offers to win an iPad two, or five times per day, is the “secret” unfathomable wealth.

The problem is this: especially for new users, using automated scheduled tweets means you won’t be there to respond, if someone tries to engage.

Now to be fair, experienced tweeters know that some percentage of the time, their clever responses to question or comments, won’t be seen by the originally tweeter immediately. When I RT or reply to someone who I have known for a while, I am not at all concerned about how quickly they respond, because I already know they are generally engaging. If they weren’t, I would have blocked them from following me.

It is the new people, who if they are only scheduling tweets, and NEVER respond to my brilliant 140 bit of mockery, that make me shake my head like a sad guinea pig … and then block.

This brings me to the point of today’s blog post. Most blogging gurus will tell you that one should get to the point much earlier. Sadly I have blocked all of them. I digress.

The reason I am filled with guinea pig worry today is that there are still people using Twitter for tweeting. The reason it is a mistake, though not a “blockable” offense, is for the same reason new people shouldn’t schedule their tweets.

If one uses Twitter for tweeting, then they have one column showing their stream. If they tweet a question like, “Is there an optimal age for blogging? Do younger people have an advantage?” And then I answer, “I am a 44 y old & an optimist. For me I believe I will hit my peak on or around my 237th b-day.” I expect to receive a COL (Chortle Out Loud) for such a piece of comedic genius, or at the very least the more common LOL.

The problem is that the person doesn’t see my @ reply, because they are still watching their stream of new tweets from the people they follow. They miss an opportunity to shower me with external validation.

The more experienced tweeter will use Tweetdeck, HootSuite, or something similar. I have tried a number of them and find each one to be about the same. I picked Tweetdeck because I liked the colors. Tweetdeck gives one multiple columns. If they had Tweetdeck, they wouldn’t have missed my response, and my world would have been a happier place. It’s really all about me after all.

Most every serious tweeter, no matter how generous with their RTs and replies and promotion of others’ work, still has their own blahg or business to promote. There are millions of people out there and only a small percentage who “get” it. People who use Twitter for tweeting are mostly new, and thus often don’t know about the other options.

Image: WOAW – the world of animal welfare via Flickr, CC 2.0

Brian Meeks used to make his living in the virtual world of Second Life, where he built spaces for corporate clients under the name Ecocandle Riel. When the economy went south, he turned to Social Media and does this to feed and clothe himself.  In his free time, he does … well … social media … and publishes the blog Extremely Average. He can be reached by email at ExtremelyAverageOne (a) gmail (dot) com, or by carrier pigeon at the house with the big tree out front. You can also connect with him on Twitter.