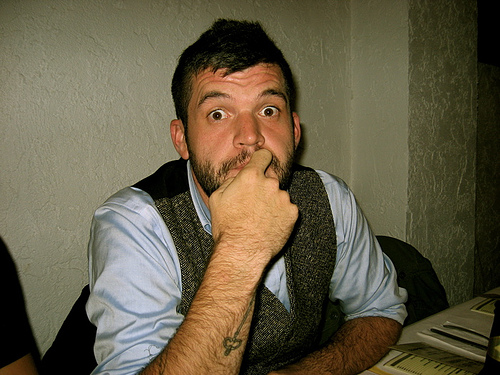 Much has already been written about BlogWorld at which, for the most part, I had a really great time. While there have been a ton of recap posts, here are some from Arik Hanson, Justin Goldsborough and Chuck Hemann to get you caught up.

The session that probably generated the most chatter was the much-hyped “New Media LIVE!” Talk Show closing keynote panel.

I couldn’t have been more disappointed with it. Here’s why (and it’s probably not what you think):

That evening, I sat down at one of the front tables (because I hadn’t seen Chris Brogan in person before this, and I didn’t want to have to watch him on the screen) to witness this extravaganza of “the latest in innovative content creation” and to “kick back, cut loose and enjoy the irreverent, humorous, off-beat, entertaining, insightful, edgy ‘New Media LIVE!’ Talk Show!” The band warming up and live music certainly lent an air of festivity to the evening.

But I wasn’t surprised when Marcus Sheridan, writing about this panel shortly after, asked, “What were they thinking?”.

Actually, he put it even more bluntly than that. Here are a few excerpts:

Without going into a long-winded explanation of the entire keynote, let me just point out a few moments that seemed, should we say, out of place…..

-Andrew Breitbart’s segment, although interesting, was almost entirely centered upon politics, not blogging.

-Sara Benincasa started her segment with a stand up ”˜comedy’ routine. By creatively re-wording the blogging seminar titles of the week, she managed to drop an F-Bomb in every other sentence, along with another slew of vulgar terms about female organs.

As I sat in the front row, blinking and cringing my teeth over and over again in utter disbelief at what I was seeing and hearing at ”˜Blog’ World, I literally felt like I had entered into a twilight zone…

But I was not the only person in the crowd who was in total shock and awe. Two women from my table alone got up and left. Many other people throughout the crowd, with a sheer look of confusion and disappointment on their faces, got up and exited as well.

I was one of the two women at Marcus’ table who got up and left. And I’ll tell you why.

The closing keynote panel was short on content; it wasn’t entertaining (outside of the band); the videos that were played early on were way too long; Mr. Brogan, who I’m told is a very nice person and has made quite a remarkable name for himself, tried too hard to get laughs where none were originating; and the X-rated jokes/videos were just … sad.

It was really boring! And made me think:

1. When we’re presenting, humor is a great way to put our point across. But more than that, it’s the content our audience is interested in. If the content doesn’t deliver, the humor is pointless.

2. When we’re presenting, we need to be aware that more often than not, we’re going to be speaking to a cross-section of people, some of whom may/may not be familiar with who we are, what we do, or the pulse of the industry in general. It’s our job to make those people most comfortable, because those are the ones we are trying to bring into the fold, as it were. It’s also our job to make sure the people who are already inside that fold get something out of it, hence #1 above.

3. Comedy is really really tough to do. If you’ve ever tried your hand at it, you know it, and if you’ve ever watched a comedy show, you know it. If you can’t do it well, stay away from it.

4. We are not professional entertainers. We are professional PR/marketing/social media professionals. If we’re good at entertaining, then that’s icing on the cake. But that’s not our raison d’Ãªtre. And we need to remember that.

5. There are many ways to set a presentation on fire. Dropping F-bombs is not necessarily one of them. And if that’s your tactic, you’d better make sure it really works.

So if you’re trying to figure out a new angle to your presentations or speeches, please do yourself a favor and don’t go for the shock value.

Because there’s nothing worse than a shock jock who’s just … boring.