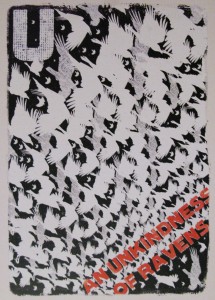 Four thoughts came together recently that gave me one of those “bolt of lightning” insights it’s useful to get from time to time. Not only that, it helped me change my approach to communication.

Those of you who read my last post about being yourself online, could read this one as a bit of a second installment to that journey.

So, these were the four colliding thoughts:

1. How magnificently deafening the dawn chorus is (I live in the country and get up early).

2. The collective nouns for birds: an Unkindness of Ravens, a Murder of Crows, a Charm of Finches, A Gulp of Magpies, A Pandemonium of Parrots, An Ostentation of Peacocks, etc.

3.  The use of anthropomorphism in brand identity and marketing, whether to describe consumer characteristics (e.g. Orange’s animal tariffs) or to convey a desired spirit (mainly the cat family – lynx, puma, lion, tiger… never slug or lungfish).

4. Twitter. Building on plans mentioned in my last post here on WUL, I have been embracing an open, diverse, genuine approach to my tweeting.

I am using it because I want to – not because my boss told me to. I want connections, not follower numbers. It has been fun and rewarding, and I have met some wonderful people. But I have also been left unsatisfied by the volume of one-way communication. There’s a lot of shouting, and not a lot of listening. A lot of “me,” little “you” and hardly any “we.”

So #4 got me thinking about #3 – how “Twitter,” as an anthropomorphic name, perfectly describes that chaotic, disparate, competitive, showboating raucousness of #1. That early morning is the busiest time for tweeting – everyone competing for space and attention – further resonates with this idea of bird communication. Sometimes, it can be too loud, exhausting and ineffective.

The collective nouns – thought #2 – seemed pertinent here. What group did I belong to?

• Ostentation of Peacocks
…Me, me, me being amazing, look at my business, read my articles, here are some selfies, a bit more me
• Pandemonium of Parrots
…Constant 24 hour activity, non-discerning, lots of interactions; not tweeting but squawking
• Gulp of Magpies
…Taking shiny stuff from other people’s feeds and tweeting it as your own
• Charm of Finches
…A serial, people-pleasing re-tweeter with safe words like “lovely”
• Unkindness of Ravens
…The smart guys, the clever strategic tweeters and superior communicators. The “unkindness” is a misnomer (keep reading!)
• Murder of Crows
…’orrible, troll type mean-ness

I can find examples of each group in my own feed. You probably can, too.

But which group do you most fit into?

I think I am a chimera offspring of a magpie and a finch. A Finch-Pie. I get a huge amount of great info from Twitter, but I don’t always start conversations with the curators; when I do initiate chats, it often involves words like “lovely.” I don’t think I do much to be an authority on any subject, or inject much original thought into people’s feeds. I guess my diagnosis is “nice but not influential” – perhaps reflected in the fact that I get “favorited” more than re-tweeted.

With that in mind, I developed an audit. As part of my ongoing effort to make KPIs out of relationship-building, each month I will print off my tweets from the last 4 weeks and evaluate :

Which number is higher – followers or follows?
What percentage of tweets contain an @?
Of those @s, how many are conversational?
How many of my follows have I met in real life?

My aim? To join the Unkindess of Ravens.

The name comes from an old legend that ravens push their young out the nest to test their survival. It does a disservice to a super-intelligent creature that is apparently the third-most skilled communicator after humans and monkeys. They make 30 different sounds and, although they do a lot of talking, they also possess highly developed hearing. They are adept at both solitary life and living in huge groups. Like any successful species, they learn from trial and error.

Talking and listening, diverse communication tailored to each situation, sociable but confident when alone, constantly adapting, learning and fine-tuning… now doesn’t that describe the kind of communicator you would like to be? 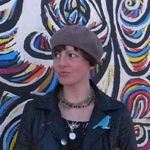 Holly Dawson is editorial director of Ethical SEO. Based in the heart of the English countryside, between London and Brighton, she spends her days supporting good people to do interesting things online and thrive in the connection economy. She enjoys exploring the parallels between the brain, human behavior, and the digital world, and she vastly over-uses the word ‘relationship’. Her work is driven by, as Godin says, “creating ideas that spread, and connecting the disconnected” (although her main goal at the moment is to stop endlessly quoting Seth Godin).