I was reading a recent HubSpot report on how people interact with content (the report was published in June, and I haven’t seen too many gurus re-report it, which is a bit surprising… but then again, that leaves room for me to do so, so yay!).

While I don’t think it’s “the future of content marketing” (as HubSpot has ambitiously christened it), it’s worth a read. I think the data are fairly decent, since they say they fielded their survey via SSI.

Of course, you could question the validity of a global sample of online consumers with no respondents from India when, according to Internet Live Stats, it has almost 1.5 times the number of internet users the U.S. does … and the writing is a bit clunky… but let’s not quibble.

Here are three elements to layering content – including multimedia – that the report made me think about, and that I hope you will consider as you work on (or rework) your overall content strategy.

1. Good content still needs to be found. But it can be found in a variety of ways.

Also up there are Twitter (so clearly Twitter’s good for something!), mobile notifications, and LinkedIn. Sources like RSS readers, Flipbook and so on are at the bottom of the list.

HubSpot’s take on this is, IMHO, a bit plebeian:

Impact to marketers: These browsing habits will require content distribution approaches that many business have not yet undertaken – spreading out their content onto different platforms instead of hosting it on their website. We’re finding where consumers go, content has followed, whether it’s dispersed to a social network or consumed through mobile aggregators.

What I think bears reinforcing here is that how people find relevant content now more than ever has to do with quality and versatility.

That means coming up with really good information that matches what your audience is looking for, and crafting it in such a thoughtful and strategic way that its likelihood of being found increases.

That also means coming up with content that is good enough for people to consider sharing, and to which they consider linking back.

And it also means learning to say the same thing in many different ways, but without driving people into doing their best impression of a sloth.

Maybe your core content is long-form, but with a really riveting image that you use for sharing on Facebook, and maybe there are several tweets you create from it, some of which oh, by the way, have GIFs attached, and maybe…

You get my drift.

2. Interactive articles may not be all that they’re cut out to be… yet.

I found it interesting that, when respondents were asked what types of content they consumed thoroughly v. skimmed, interactive articles had a relatively high skim rate.

This is really surprising to me, given the attention interactive efforts have been getting recently. I’m sure you saw this one from the New York Times on Simone Biles; in fact, the NYT has really been diving deep into interactive stories.

Also, I found it somewhat contradictory that while respondents said they consumed social media posts thoroughly, their skim rate for those wasn’t that far off from that of interactive content… nor that of news articles. 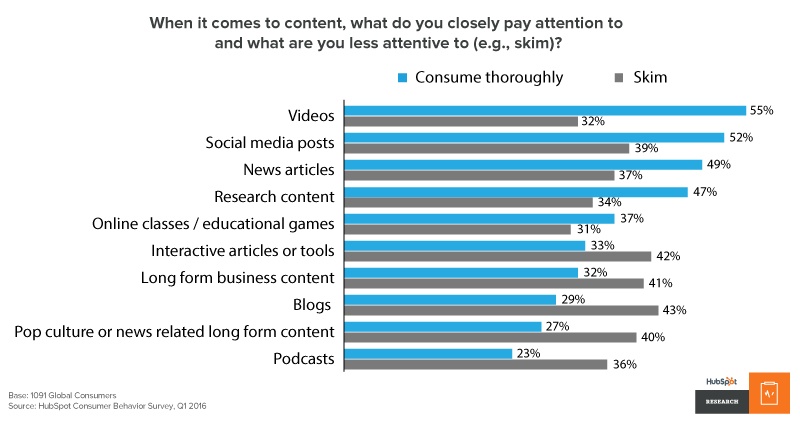 So, to me, this says two things:

a. People are very confused. :)

b. The bells and whistles you spend so much time on, when coming up with content and especially when trying to make it really engaging and interactive… might be having just the opposite effect, if the purpose is to get people to not just skim it.

I remember when I first saw that Simone Biles story; it was actually via Greg Rokisky, who shared in in the Social PR Virtuoso™ private Facebook Group.

But nine times out of 10, I don’t get to the end of these interactive pieces, regardless of how well they’re done… because it takes TOO MUCH TIME.

Figuring out the right approach to content can be so exhausting. Because you’re trying to meet your audience’s needs, and your organization’s, and make it interesting, and engaging, and SOMEONE STOP ALREADY!!!

So I do think time needs to be a major consideration.

Almost all days I have a lot of time for cute Corgi videos… but very rarely for boring business books, even if all the social media gurus are buzzing about them.

This brings us back to how we are parsing out our content (see #1), and what we’re ultimately trying to achieve via that content.

I’m sure the NYT wants readers and potential subscribers to view those beautiful pieces they spend so much time and effort on.

But it probably doesn’t kill them if folks don’t consume the whole thing … as long as, over time, they’re getting more and more people to consider some form of subscription, and/or click on ads, paid posts, etc.

3. Don’t do video just because everyone is telling you you should.

The final section of the report looks at video consumption habits, drawing conclusions that are, again, unsurprising.

I mean, everyone and their brother is jumping into live streaming, so it must be what we need to do… right? 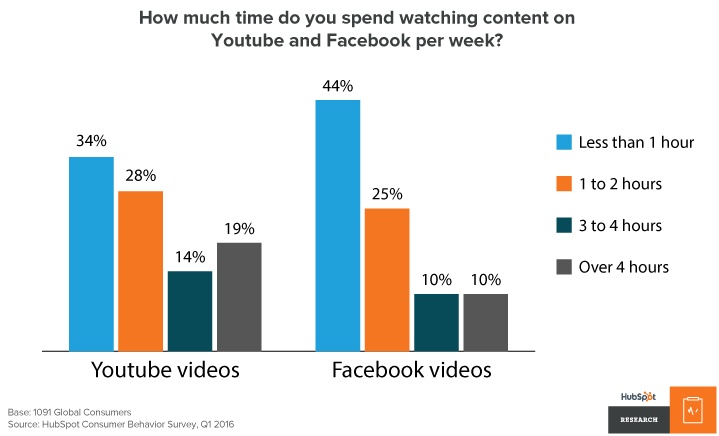 Yes, younger people spend more time watching videos online. Yes, their purchasing power is going to increase (one would hope) as they grow older … again, none of this should be particularly surprising to us.

How about you look at these numbers this way: more than half of these respondents said they spend up to two hours watching YouTube or Facebook videos… per week.

That’s an average of 17 minutes PER DAY.

No. They’re probably watching make-up videos on YouTube, or trying to find Usain Bolt beating Andre de Grasse in the 200m semifinal, or watching Corgis, or…

And that’s a heck of a lot of time they’re not spending on watching online video, and doing something else!

How about trying to get them there, where they’re doing something else, which is somewhere else?

Which takes me back to #1 above.

So don’t go crazy “doing video” unless you’ve really figured out why you’re doing it, how it plays into your larger strategy, and ultimately needs to happen.

My last word (for today)

Yes, video is great, and it’s fab when we can incorporate it, and other multimedia efforts, into our content strategies.

But that word is key: strategy.

And smart strategy won’t hang its hat on just one tactic.

It will be outcome-oriented, and integrated, and multifaceted, and engaging.

That’s my last word (for today)… and I’ve certainly said enough of them! What say you… what do you think of this report? Are you having success layering your content strategy? How? Please share, you know I’d love to know.