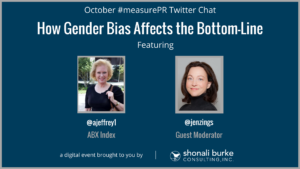 Our guest for the October chat was Angie Jeffrey, APR, ABX’s Vice President of Brand Management. She is on the team behind the Gender Equality Measure (GEM™), created jointly by ABX and the National Advertisers (ANA) Alliance for Family Entertainment (AFE)’s #SeeHer team.

First, we discussed Angie’s background and her entry into the world of measurement:

A1 Dug deeper into #measurepr as member of @iprmeasure, linking PR to outcomes. Now deep into ad msmt @abxindex

We continued our discussion by moving on to a question about barriers to measurement. On this topic, Angie noted a big one—that despite years of concerted effort on the part of IPR and other organizations, there’s still a lack of knowledge and understanding:

A2 Biggest barrier is lack of knowledge despite great education from #InstituteForPR, #amecorg, #prsa and more @abxindex #measurepr

She further noted that a great tool to advance measurement is AMEC’s framework:

A2 Best fix is new #amec Integrated Framework that trains you on the whole process https://t.co/toUJDvbQOh @abxindex #measurepr

Understanding that failure is one of life’s greatest teachers, we moved on to the topic of PR measurement fails. Angie brought up an important point—when measurement is too complex, eyes glaze over:

A3 I’ve seen really complex #measurePR that looked great on paper, but was so text heavy, it was a #fail with clients @abxindex

Angie chimed in pointing out that overly simplistic measurement that doesn’t provide insight isn’t useful either:

A3 The other extreme is #measurePR that is too simple, relying on counts without tone, message or insight – #fail.

The chat then moved on to discuss evidence of gender bias in advertising. We discussed what it is, how it is detected and measured, and why this is important:

A4 @abxindex tested 25,000 ads for #ANA to see effect of gender denigration in ads, and it is huge. https://t.co/i58xGgtEl1 #measurepr

A4 Ads that treat women/girls well increase Purchase Intent by 26% and Reputation by 10%. https://t.co/CDYSTNX6Fo #measurepr

Kristie noted why this is so important for companies to know and understand:

A4: Smart companies realize buying power of females (of all ages) and depict them accurately and respectfully #measurepr

Uncovering gender bias can be tricky, so the next question asked what challenges there are in this type of measurement:

A5 It’s never been done before. Massive ad testing was needed to create norms. #abxindex only company who could test 25K ads #measurepr

This is further complicated by a problem almost every research project faces—funding can be hard to secure:

A5 Like in PR, no one wants to spend money on more research. #ANA has had to prove the value of measuring gender. #abxindex #measurepr

PR pros generally focus on the written word, but with content creation, images are now a major component of what we are producing. This is an important point:

A5 Measuring gender in PR must now begin. PR’s use of images in content marketing and social must be equally guarded. #abxindex #measurepr

Angie suggested that PR pros take a look at KPI questions to identify what they should be looking at to determine if gender bias exists in what they are producing:

A6 PR pros can start with Slide 8 of this #genderequality deck https://t.co/Dxt9WV9Lwo, which has four key KPI questions. #measurepr

A6 The deck explains the @abxindex and #ANA gender research. The 4 key questions can be scored like message points in PR msmt #measurepr

A6 Nothing formal exists yet in PR to measure gender, but the https://t.co/Dxt9WV9Lwo deck gives rsch and concepts to apply #measurepr

Advertising and PR—especially earned media—are tied together, so the focus on efforts to reduce gender bias do have an effect on PR:

It was an important chat, with Angie providing a ton of great information.

There’s much more to learn than what’s contained in the summary, so please check out the #measurePR transcript for October 12 to see what you might have missed—especially all of the resources provided by Angie to help you get started.

The next #MeasurePR Twitter chat will be held on Thursday, November 9, 2017 at 12 pm ET. Instead of having a special guest, we’ll hold a community chat, where the special guest is YOU … it’s long overdue!

This is a great opportunity for you to give and gain insights from others who share your passion for smart measurement.

So make sure to mark your calendars for your monthly dose of smart measurement talk and use the hashtag #measurePR to join. We hope to “see” you there!

Jen Zingsheim is a writer and strategic consultant based in New Hampshire. She most recently served as Vice President of Content Marketing and Media Analysis for eOutreach/CustomScoop, analyzing media, digital content, and trends for Fortune 500 clients. Earlier in her career, Jen worked at Fleishman-Hillard’s St. Louis headquarters, and the Missouri Chamber of Commerce and Industry.