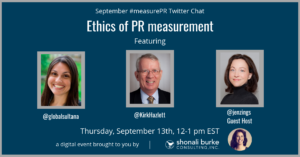 Sultana F. Ali, APR, has a 15+ year career in communications and marketing, and is adjunct faculty in Georgetown University’s Corporate Communication and Public Relations program. She previously served as President of PRSA-NCC, the largest chapter of PR professionals in the U.S.

Kirk Hazlett, APR, Fellow PRSA, is Adjunct Professor in Communication at the University of Tampa. He is also the Ethics Officer of PRSA Tampa Bay, and co-chairs the PRSA Tampa Bay PRSSA and New Professionals Committee and is PRSSA Liaison, PRSA College of Fellows Mentoring Committee.

The guest moderator was Jen Zingsheim Phillips, who is a freelance writer and communications strategist with 4L Strategies.

Understanding what ethics in measurement means can be varied. For one, it means collecting and reporting accurate numbers, and resisting the urge to inflate results as Kirk Hazlett noted:

A2. I can remember…eons ago…being “encouraged” to inflate media results to “make the client happy.” (Note: Happily, the results were already very good, so I didn’t have to.”) #measurePR

And he followed up with an explanation of why this can sometimes happen:

A2. There is always the temptation to “bump up the numbers” to “impress the folks ‘upstairs.’ We, as communicators…particularly as PR professionals…have to be prepared to resist the urge and to be able to explain why. #measurePR

Sultana Ali pointed out what is at stake: your reputation as a Public Relations professional.

A2.  You are responsible for the public good as well as your organization’s communications and have to view things from an ethical lens. It’s an occupational hazard; people may lie to you. However, your credibility that suffers when the lie is discovered.  #measurePR

Question three dealt with reputational risk, something that pretty much every company or institution out there thinks about—but sometimes only during a crisis. That’s a mistake, of course—reputational risk can come in many forms:

A3. It’s important to remember that numbers are numbers and should be concrete facts. If people cannot trust the numbers you share, that invites reputational risk. It’s difficult to regain trust after it’s lost. #measurePR

Kirk agreed with Sultana, pointing out that “numbers should not lie”:

We also talked about ethics measurement failures—what they are, and some examples of situations where this has been at issue:

A4. Most common #measurePR fail is failing to see the bigger picture. Ex: we often think of our target audience in PR, but if you don’t put yourself in the shoes of the larger industry/society, you may miss a relevant POV that could land you in hot water. #measurePR

Context matters too. In question 5, we looked at the differences between legality, morality, and ethical behavior. Kirk put it forth quite directly and simply:

A5. #ethics says “this is the right thing to do for these right reasons.” #measurePR

A5. Morality says “doing this good thing will be good for mankind.” But it may not necessarily be the ethical thing to do… “What you don’t know won’t hurt you.” #measurePR

A5. Legality says, “The law says ‘do this.’” But that advice could mean “Don’t give them all the facts. Just tell them what the law says we have to say.” #measurePR

We started to run short on time—there was so much to cover! Question 7 asked, “what is ONE thing PR Pros can start to do right now to wrap ethics into PR measurement?”

A7. Make it crystal-clear that ethical communication is the ONLY way to ensure continued success. #measurePR @CCPRSA @USFPRSSA @utprssa

And from Sultana Ali:

Q7. Great question! I’d suggest as a first step to conduct an audit of all reporting/analytics, and to have one-on-ones with comms staff and key stakeholders on how they think things are going in #measurePR

It was a terrific discussion and provided a great deal of food for thought. For the full transcript, check out the #measurePR Transcript for September 13, and we hope to see you next month for another great #MeasurePR chat!

Jen Zingsheim is a writer and strategic consultant based in New Hampshire. She most recently served as Vice President of Content Marketing and Media Analysis for eOutreach/CustomScoop, analyzing media, digital content, and trends for Fortune 500 clients. Earlier in her career, Jen worked at Fleishman-Hillard’s St. Louis headquarters, and the Missouri Chamber of Commerce and Industry.