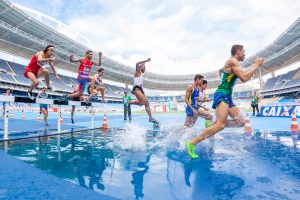 Do you know what you’re going to be doing at 8 pm ET tonight?

I know what I’ll be doing. Watching the opening ceremony of the 2016 Summer Olympics on NBC, broadcast live from Rio de Janeiro (I mean, Zika can’t get me through an LCD screen, can it?).

But you know what’s really interesting about the 2016 Olympics?

Yes, it’s one of those unique events that brings people together from all over the world.

I honestly can’t think of another that’s comparable – maybe the soccer World Cup? – but that’s not what makes this edition of the Games so unique.

It’s that finally mainstream media are realizing that social media isn’t going anywhere… even if some of them are having a hard time accepting this.

As a result, the way social is being integrated into not just the broadcasting, but the experiencing, of the Games, is quite wonderful.

Especially given how much we interact with the world through our mobile devices, this is a smorgasbord of social viewing options!

Stop the world and let me on

The other day I caught an NPR report on the YouTubers descending on the Games.

And I was a bit taken aback that today – in 2016, where AR/VR is actually becoming a thing, that’s how far we’ve come from a technological point of view – someone was still asking the question, “Are [vloggers] journalists?”

I mean, hasn’t this question been done to death?

Not only has it been done to death, the only way traditional media outlets are learning to keep their heads above water in the “new” (which it really isn’t any more) landscape is by reinventing the information and entertainment experiences (Serial, anyone?), and understanding that they have to adopt build fervent communities of fans and evangelists through social channels … in other words, a lot of Social PR.

And that means letting go of old notions of who is or isn’t a journalist, and what people may or may not be getting out of their “reporting.”

Listen: before writing this post, I had no clue who Brodie Smith was.

By no means am I advocating for the “death” of journalism. I believe that today, more than ever, journalists plays an incredibly important role in keeping us informed of all sides of a story.

This is why influencer marketing is such a big thing these days. And anyone questioning the appropriateness of YouTube stars being sent to cover the Games, but not the NYT is, in my opinion, lamenting a world that just doesn’t exist any more.

For my part, I think it’s pretty wonderful that we have a way not just to watch one of the most exciting and inspiring events of the human race, but to experience it together.

So I’ll raise a virtual glass to Brodie Smith, his cohorts, and everyone doing their bit to collapse the space that divides us.

Because we need it. Today, more than ever.

How do you plan to experience the 2016 Olympics – traditional broadcast, YouTube clips, official sponsored videos, unofficial vlogs…? Lemme know! And have a great (and safe) weekend.