On Public Relations and Taking Out the Garbage 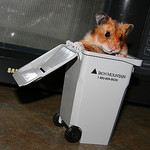 I recently had a “talk ’em off the ledge” conversation with a young friend who has just passed the half-year mark with a big-city PR firm. She had targeted this particular firm because its focus and client mix mirrored what she had been passionate about in college, and she dove in with enthusiasm.

But, as those of us who have “been around the block” a few times know so well, nothing’s perfect, especially when it comes to working for a living, which I’ve talked about before.

It was 10 o’clock on a Friday night. She was holed up in her cubicle putting the finishing touches on some press kit materials for a client, and her phone kept up its insistent buzzing with messages from friends out on the town wondering where she was. This wasn’t the first time that she had been “stuck in the office” late at night.

All of a sudden, it wasn’t fun anymore.

When I saw her initial tweet of frustration, I responded and we traded several notes with my wrapping up around 11-ish assuring her that situations like this are neither unusual in the public relations world, nor are they an indication that her higher-ups don’t value her as an employee.

This incident reminded me, though, of the numerous conversations I’ve had with students at Curry College, where I oversee the Public Relations Concentration. They express an interest in public relations, but when the question is put to them,“What is it about PR that interests you?” more often than not the response is

To which I usually respond, “Do you like taking out the garbage?”

Then comes the quizzical “What do you mean?” look.

That’s one of the eternal challenges for those of us who work in or teach public relations. Our profession is viewed by many as a glamorous, rub-shoulders-with-the stars, party-every-night kind of business. And I’ll grant that… sometimes… it can be kind of cool.

But there’s a lot of grunt work that goes on in the background to make sure that the party goes off as planned, or that the VIP gets the attention he or she expects. There are any number of pieces of collateral material that have to be created. There is painstaking research to be conducted to ensure that no surprises pop up. And sometimes you’re the only breathing soul there at 10 p.m.

In today’s instant gratification world, public relations can be perceived as a glacially-slow process.

Yes, occasionally things happen quickly, and that’s fun. You do something, and you see results soon after. But, more often than not, it’s a process…a lengthy, evolutionary process. And the results may not be seen for weeks, or months, or years.

But the reward is still there, the feeling of satisfaction for having been a part of an initiative that resulted in good things happening for a client or employer.

So, as I assured my friend, there will be good stuff that she’ll be a part of as she progresses in her career.

But sometimes, she’s just going to have to take out the garbage.

(Note in closing: I spoke with my friend at the end of the following day. She was cheerful and excitedly talking about a new project that she had been asked to work on. She also thanked me for listening. We do that in PR, too… a lot.)