On 9/11, 3/11 and Non-Traditional Communication In The Wake of Disaster 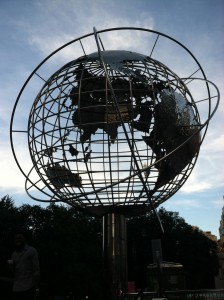 When disaster strikes, how does the soul communicate?

A couple of weeks ago, I attended one of the most interesting and poignant events in recent memory. That too, it was a client event. So when you get paid to be at a confluence of space and time that is quite extraordinary, you have to look up at the skies and say, “Thank you.”

You’ve noted all my disclosures above, right?

What was so riveting about this event was how much it taught me about community, survival, and the communication thereof.

On Monday, Aug. 26, the government of Japan’s Iwate Prefecture hosted a special “gratitude reception” at the Japan Society in Manhattan. And it was one of the most humbling experiences of my life.

Gratitude? Why? WTF is IP, and where? OMG, WWTBD? (See Davina Brewer if you can’t figure out what that acronym is.)

Iwate Prefecture is a region in northeastern Honshu, Japan. It was one of the areas hit particularly hard after the catastrophic March 2011 earthquake and resultant tsunami (“3/11,” as the Japanese refer to it). I can’t imagine you don’t remember it, but the death/missing toll was almost 20,000.

Iwate, as well as other prefectures in Japan, received an outpouring of aid from across the world. A significant amount of aid came via Operation Tomodachi (meaning “friend”) launched by the U.S. military shortly after the disaster. And thanks in large part to this aid, they were able to go into reconstruction mode, which is where they are now, and expect to be for a few more years (target completion: 2018).

The people and government of Iwate Prefecture were (and are) incredibly grateful for this support. They wanted to show their gratitude to America(ns), so organized an event where the Governor of Iwate himself flew over to provide a detailed presentation on the reconstruction efforts.

Several survivors of the catastrophe were present at “Thank You Tomodachi,” including students. There were amazing Japanese classical and pop music performances, a wonderful buffet featuring food and beverage specialties from Japan and Iwate (they flew over Iwate beef!), and a heartwarming performance of Sansa dancing.

Working in close coordination with IP’s Japanese PR firm, it was the job of a terrific social PR firm in DC (cough cough) to promote this event to the media and bloggers. Working with my associate, Mercy Chikowore (you should totally hire her, she’s awesome!), and amply supported by Karelyn Lambert (you should hire her too, but don’t give her so much work that she can’t work with me anymore!), we worked our butts off to do this. All said and done, it was a terrific assignment and I would take it on again in a heartbeat.

Straight from the heart

One of the things that touched me the most about this event was the extraordinary lengths the people of Iwate went to – via their elected officials, to be sure – to say, “Thank you.” I mean, who flies almost 7,000 miles to do that, with no expectation of anything in return?

It was one of the reasons I felt so privileged to work on this event. And it was evident all through that evening that, despite the horrors they’d been through, all the Iwateans and Japanese folk present, and related to the event, felt grateful to be alive.

Despite the horrendous losses they have incurred, they were present in, and appreciative of, the moment. They felt, and still feel, the deep heartbreak that swept in along with the disaster of yesteryear, yet they look forward to tomorrow.

The thing is, when you feel things truly, honestly, authentically, you don’t always need words to convey that. 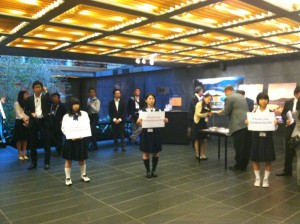 I saw this in stoic resilience of the schoolchildren who survived the disaster. Some without parents, some without families. One schoolgirl’s mother is still listed as “missing.” After more than two years. Yet she had a smile on her face throughout the event.

I saw this in the infectious, uplifting smile of Ms. Sansa, who danced her heart out to share one of her country’s great cultural traditions. She loved what she was doing – two very simple steps, repeated over and over again – so much that she couldn’t help but break into smile. She brought tears of joy to almost everyone who was there.

I saw this in the tears my colleague, Takashi Michael Matsuo, wiped away frequently as Gov. Tasso of Iwate Prefecture presented his update, complete with riveting images. Michael had his back to me during the dark of the presentation, but his body language told me what he was going through.

I saw this in the dedication the entire combined Japanese-American team had to the event. Every detail needed to be perfect, no matter how many times we had to go over them, so go over them we did.

I saw this in the infectious Japanization (if that’s a word) of popular Western songs like “Obladi-bla-da” and “Diana,” by the classical koto and shamisen players present. Nothing like throwing caution to the winds, and adding in an infectious guffaw or several, to bring smiles to onlookers’ faces. 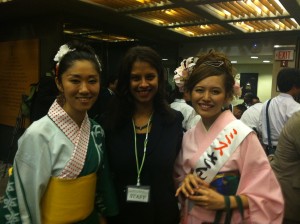 I saw this in the care the servers took to prepare the Iwate beef that was part of the buffet. Pop it into a sizzling pot of boiling water for perhaps a few seconds – perhaps the water is marinated/seasoned? I don’t know – but pull it out before it is overdone, while making sure it’s not underdone. And it was just perfect.

9/11 was one of the biggest disasters the world has seen. 3/11 was catastrophic. Both are events that at least we, who lived as adults through each, will never forget, regardless of how close or far we were from the actual events at the time.

But what is incredible, to me, is how we humans communicate in traditional and non-traditional ways during, through, and after such times of tragedy. Somehow, we help each other through, with or without words. Somehow, we are able to get up and go on the next day, even though our hearts are breaking inside. Somehow, we show each other that we do, in fact, care.

The human spirit is an incredible thing. And at the best of times, the worst of times, our spirits, our souls, communicate with each other, sometimes without our even knowing it.

A wish and a prayer

So on this anniversary of 9/11, I have one wish – you may call it a prayer – for us all; that we let our spirits fly. By doing so, we will communicate, and connect, with each other, in a truer, more authentic way than ever before.