Why Vulnerability is at the Heart of Building Community 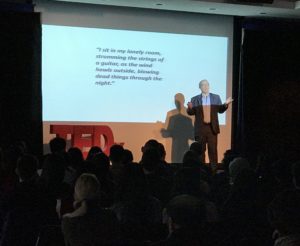 Let’s get the name-dropping right out of the way: NPR’s Jack Speer is my friend.

And because he’s my friend, he invited me to TEDxJHUDC this past weekend, where he was speaking (presented at/by Johns Hopkins University, where we are both adjunct faculty).

It probably won’t surprise you to know that Jack killed it.

But what really made his presentation stand out was that … he sang.

Yes, “for NPR, I’m Jack Speer” sang the chorus of “American Pie” during his riveting presentation on storytelling.

And of course, he got a massive round of applause (and a bit of “whoo whoo!!” from yours truly).

As I’ve been processing that entire afternoon – because every single speaker was incredible – Jack’s performance, in particular, made me think about the importance of vulnerability.

I don’t care how much of a celebrity you are, or how used you are to performing; any time you open your mouth to sing, you’re taking a huge chance.

And when you do it at a TEDx? That’s YUGE!

You’re opening yourself up to amusement, mockery, criticism… even one of those reactions will be enough to have you nursing your wounds for days.

But you’re also opening yourself up to wonder, awe, and joy… and a community that starts to bond even more deeply with you.

If you work in community building, being vulnerable is essential.

And if you look at those who rise to be leaders in their communities, you’ll see that vulnerability is a huge part of that ascent.

The PR industry has been indelibly shaped by her career and contributions, but it’s Patrice’s willingness to share her personal tragedy – and how she transcended it through ballroom dancing – that makes you want to be around her as much as you can.

And it’s why she’s such an incredible coach in her new business, where she helps you find your purpose in life.

At the beginning of his book, “Known,” he opens up about some extremely personal challenges he’s overcome, that make you look at his success in a whole new light.

Btw, if you haven’t yet read it, you should.

It’s that willingness to be vulnerable and real that draws people to Mark, frequently becoming complete and utter groupies (which trust he never betrays, mind you).

I could go on and on, giving you example after example, but I think you get the point.

So why is vulnerability at the heart of building community?

1. It shows people you’re human and makes you more relatable.

Yes, we are living in a world where AI is becoming more and more omniscient by the day. But communities are still made up of people.

And the one thing that is not negotiable in order for them to come together is a shared sense of purpose or passion (usually both), which every single person in that community can relate to.

Being vulnerable about how your own personal journey led you to create that community is often the catalyst for that relatability.

Nothing is more attractive than honesty. You know in your gut when someone’s being honest, or when s/he is trying to pull the wool over your face.

And who would you rather be around? Someone whose every move needs to be deciphered, or someone you can trust, so you can get a straight answer and move ahead with your work?

Which leads me to Point #3.

Think of all the time and energy people spend putting up a front, trying to be who others want them to be.

Opening yourself up, so that what people see is what they get, is a far more efficient and productive way to live.

It is also the highest level of marketing because you essentially create a framework by which like-minded colleagues and prospects self-select themselves into your community.

But when it comes to marketing, there’s a catch: you HAVE to be real.

It won’t work if you’re faking it because you’ll just attract the wrong type of community member. One whose values and purpose are in no way aligned with yours.

And you don’t want to do that because it takes a heck of a lot more effort to shake ’em off than to attract the right ones in the first place.

And there goes efficiency out the window.

So what does this mean if you’re looking to build a community for your business or organization?

1. Know how you provide value to your community. Then articulate it as simply as you can.

There are many wonderful companies that do amazing work. They are very clear as to why they do what they do, and how they make the world a better place.

But they don’t often articulate it as clearly and simply as they could.

So if you haven’t already zeroed in on a simple, easy to understand mission statement and value proposition, that’s the first thing you need to do.

And this means being open and vulnerable about who you are as a business and why you exist… and being willing to accept that it may not be for everyone (which is completely ok, at which point was “everyone” your target audience?).

I say this so much you’re probably tired of hearing it, but I say it so much because it’s just that important.

Set up your listening program to zero in on those whose conversations resonate with your company’s mission, purpose, and objectives.

The vulnerability here is in being willing to put your preconceived notions aside, allowing you to connect with those you might not normally think you’d vibe with.

Keeping an open mind is a huge part of vulnerability.

What are the parallel threads? Where are the points of connection?

Start talking to them once you know you can add value to the conversation and their lives, and you’ll learn pretty quickly whether or not it makes sense to invite them into your community.

This was essentially the approach we took when working on the Blue Key campaign for USA for UNHCR, and boy did it work.

3. Let the community self-correct… but be ready to bring it back on point if necessary. 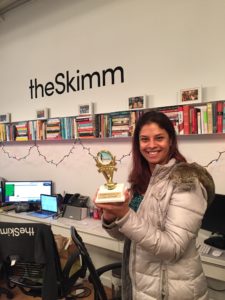 I’m immensely proud to be a part of the Skimm’bassador community, where uber fans of theSkimm (sign up here!) congregate to discuss anything and everything under the sun, from politics to skin products, to travel tips and more.

What impresses me so much about this community is that even when the topics are sensitive or political in nature, theSkimm staff rarely interfere with the conversation, letting it take its natural course.

However, if they see it going off the rails, then they do step in, and remind folk of the community participation guidelines.

Equally impressive is how they respond when there’s negative feedback about the way something was handled in the newsletter.

They don’t back down from their POV, but respectfully acknowledge the right for others to have a different one.

If warranted, they’ll apologize. And then everyone moves on.

That willingness to create and protect a platform where we can all be vulnerable together – making it almost a sacred space – that’s why I, and so many others, are literally rabid Skimm’bassadors.

So think about how you can start being more vulnerable in your business communications, even just a little.

Now, I’m not asking you to strip nekkid and go do a Polar Plunge somewhere to show your vulnerability.

Start somewhere small (e.g. #2 above). Get comfortable with where you are. Then move to the next level.

And before you know it, not only will your community rally around you like never before, you will have forged incredible bonds by learning from and with them that will take your work – and life – to new heights.