Using words, reading books, giving and hearing speeches, creating messages to help people get the point across… all are not just my job, but my actual favorite way to pass time.

But instead of watching Gangham Style, I watch speeches. Speeches from great figures in history. Speeches from significant speakers have changed and shaped the world, for good or bad.

I feel as though meditating on words at all times is perhaps the best way to improve them.

And with that, I get completely sucked in to the task of engaging my world with language. I especially like watching political speeches in any form, be it a lone address, interview or debate.

And sometimes, in watching debates, I come across figures I have never heard before.

Recently, I learned of a Jewish New Yorker named Joseph Cohen who settled in Israel, then, converting to a rather radical form of Islam, changed his name to Yousef Al Khattab. Then he started a semi-Jihadist group called Revolution Muslim that would eventually protest the semi-famous South Park 200 episode where Muhammad is thought to be shown on camera for most of the episode. Later, he would leave the group, denouncing his old actions and seeking peace.

With great curiosity, I looked him up on YouTube and, as often happens, got lost in the rabbit hole of YouTube videos related to the searched subject.

But what struck me more than any of the speeches was the ad YouTube decided to show me at the top of the screen:

The most innocent looking Muslim singles dating ad you could ever see. 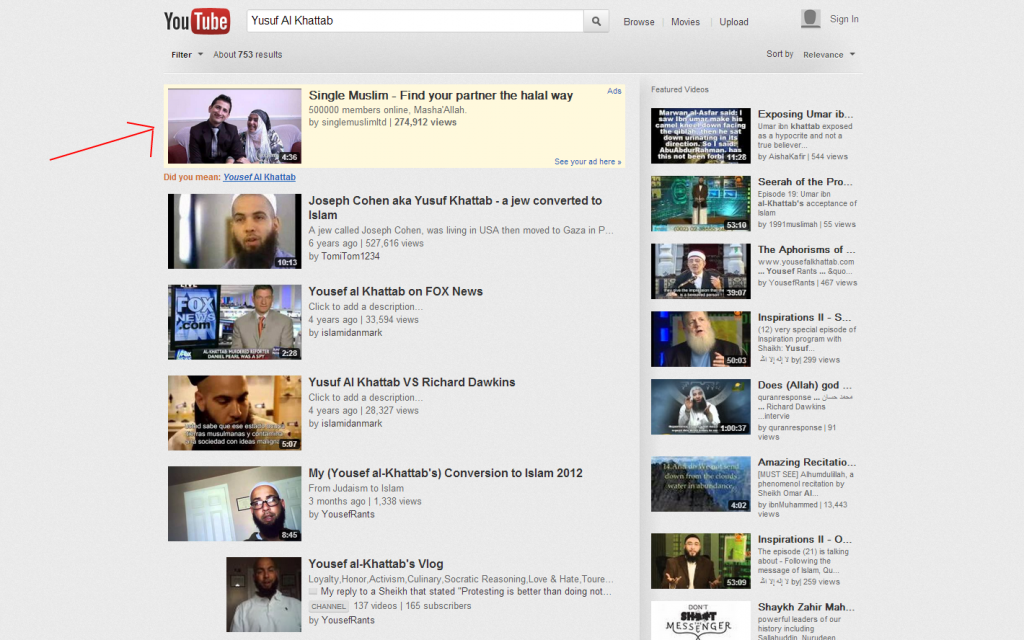 So there you have it. For whatever reason, YouTube””and by YouTube, I mean Google””somehow came to the decision that this ad was the best fit for the search of a dramatic, controversial character (no matter how reformed he is now).

Had demographic research hit the spot, I would have seen an ad for a book on the coming philosophical divide between… well, it doesn’t matter exactly who. Just something other than a singles ad would have made more sense.

I thought about just taking the experience for a laugh, but there’s something more here than that… something I can’t exactly put down.

Why did YouTube’s market targeting dynamics think I was right for the ad? Is there something presumptuous about categorizing me that way?

Even if I were Muslim, is it right to assume that I am interested in a singles ad because I am researching a radical Muslim political figure?

And what of my past searches for people on all sides of the political and religious spectrum? Should I be happy that YouTube didn’t save the searches and make presumptions about my real interests, or disappointed that the ad was poorly tailored?

And that’s when it really hit me: maybe marketing is inherently discriminatory. To assume you are going to reach an audience with a message that will work, you have to make assumptions based on intuition, incomplete research, or both.

And to take that a step further… to exist as a healthy, social person, you have to do the same!

If this line of reasoning holds water, then the everyday assumptions we use to navigate our daily lives permeate everything we do and bias us in ways we might not even notice; a somewhat frightening thought.

Yet I see a different, advantageous quality to the process of discovery that led me toward this conclusion.

The fact that a person can think about these issues and feel them out suggests that rhetorical consideration offers us a way to neutralize our biases.

Then again, there is always the chance that my belief in assessment rather than purely intuitive thinking is a living, breathing bias of my own… but I don’t see the evidence for that.