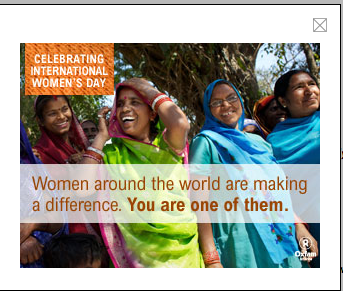 One of the most fun projects I’ve worked on recently was Oxfam America’s (OA) International Women’s Day  (IWD) 2012 campaign.

You might remember my telling you about this; long story short, we were asked to provide digital support for the campaign; specifically, to engage bloggers with the goal of raising awareness for the campaign and the work that OA does to empower women around the globe.

Since OA already has a robust social media presence, our task was not to add to its social media plan, but to supplement it via blogger outreach.

I’ve been familiar with Oxfam for a while, and it’s a terrific organization; but the project duration was fairly short; just about a month. Since I know how time-intensive any kind of outreach can be, I was hesitant at first to take it on, but it’s such a good cause that I did. And I’m really glad I did.

Since every good campaign begins with the end in sight, our discussions led us to agree on our objective: to pitch and secure posts featuring or highlighting the 2012 IWD campaign, that specifically asked readers to:

Or, of course, any combination of the above. 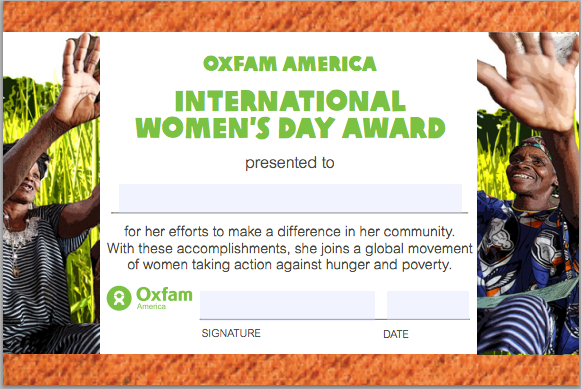 The end-goal was to secure as many new constituents to OA’s eCommunity as possible, since these are the people OA can activate when advocacy is needed. And as they opted in (hopefully) to be communicated to by the organization, OA would be able to convert them to evangelists for OA’s work and donors to the organization.

Here is where it wasn’t easy to begin with. The eCard initiative was new for 2012, so there wasn’t a benchmark, say for 2011, to set goals against. The downloadable award was also completely new (that we created for OA, based on a printable version OA had already created) – same problem.

But here’s what we did know: based on a similar initiative in 2011, where OA asked people to upload photos to a photobook, OA secured 261 new members to its eCommunity. And in 2011, there were seven blog posts on the campaign that had been tracked.

So in my head, I figured at least a 25% increase on both fronts – the eCommunity front, as well as the post front – would be a reasonable goal to set.

The big lesson here, of course, is that when you don’t have a benchmark, it’s really tough to set measurable objectives. And it takes time to look at the data you have, even if it’s limited, to figure those out. So start doing this as soon as you can.

The background work and outreach

Since we didn’t need to focus on promoting the campaign in social networks per se, but were focused on blogger outreach, we did a ton of research. And I mean a ton.

OA already knew that women, particularly urban women, are an important audience for them. Then there was the fact that the actions we hoped people would take were digital actions.

So using a variety of resources and a lot of sweat equity, we created outreach lists of “mommy bloggers,” women in the tech and entrepreneur community, influencers in the area of nonprofit/social good (check out the list I built for Traackr on this a while back), social media influencers (I know, I know, but if they get on board, they can have a huge impact) and some general outlets that popular with the social media crowd and women in general (e.g. Mashable).

After days and days of research, we narrowed down our target outlets – which included a lot of blogs, but also blogs on the online counterparts to women’s publications – to around 245. That’s a lot!

We also did a lot of background work in:

We made sure the latter two were easily accessible via OA’s ACT FAST microsite, so that it was easy for bloggers to do what we asked them to, if they were interested, of course.

And then we pitched.

Hot tip: I can’t stress this enough; even if you have done a ton of research, you should write a really good pitch that is personalized to the recipient. Do not send blanket pitches. Do not send press releases. Do not send attachments, unless you’re asked for them. Etc. etc. etc.

I am very proud of these:

And because we asked OA to keep us posted on what was happening on the back-end, we learned that:

So it was a short, intense campaign, but it worked. And it was worth it, from OA’s point of view (and certainly mine!).

And I hope that by sharing it with you (with OA’s permission, which I’m grateful for), it will give you some ideas on implementing not just creative campaigns for your clients/organizations, but on setting them up the right way so that you can really gauge the effectiveness when you’re done.

Thoughts? Questions? Would you like more case study posts? Do let me know – the comments are yours, you know that!

There are 16 comments Join the conversation