How Pepco Can Power Up Its Communications

I brought you up to speed on my conversations with Pepco and, more specifically, with Andre Francis, who manages the organization’s social media efforts.

As I continued thinking about it and how organizations approach social media in general, a couple of things became clear to me.

First, when companies – especially large ones – take the plunge into social media – they deserve our support, especially those of us who work in the field.

Second, even though companies who take the plunge should be acknowledged and applauded, having taken the plunge just isn’t enough any more.

They are now expected to engage and deliver not just rote communications, but customer service and dialog via social platforms on a regular basis.

People like Frank Eliason (in his previous life as @ComcastCares), Ford’s Scott Monty, and many others have set a high standard, and that’s the standard to which others are now being held.

So, if Pepco really wants to get ahead of the game, here are a few things it should consider, IMHO.

1. In an organization of this size, social media is not a one-person job.

Now, I don’t expect social properties to be monitored 24/7 on an average day.

In an emergency, though, I do, because when my power goes down, everything goes down. My phone line, my Internet connection, the food in my refrigerator starts rotting… everything is affected.

And to expect one person to manage the emergency response, particularly in emergencies of this magnitude, is unrealistic.

I’ve been there. I know what it’s like. It’s liable to drive one insane.

So if Pepco isn’t already beefing up its social media response team, it needs to get cracking on this.

If it can’t hire additional folks right now, cross-train those who are there.

This is something that Lisa Hoffmann, who works on social media for Duke Energy, knows the importance of.

Lisa says, “For major outages, we take an ‘all hands on deck’ approach, where we drop everything else, get all the major players in the same room, establish quick information flow and stay on top of all our outage communications, including Twitter.

“This frees up the resources and processes we need to respond helpfully in real time. This ‘drop everything’ response is part of a deeply ingrained corporate culture surrounding our commitment to restoring power quickly and offering clear communication about restoration estimates.”

2. Executives: how you say it is as important as what you say.

During last month’s outages, Charles Dickerson, Pepco’s VP of customer care, was quoted in local media as saying, “There are more important things to do,” when asked about communicating with customers.

There’s something more important than letting your customers know that you’re on the job – especially when the widely-held perception is that you’re not – and trying to get their power restored as quickly as possible?

Clearly restoring power is crucial, which is what Dickerson meant.

But no one likes to hear it’s not important to tell them – or at least give them an honest answer – as to when that happy moment might be.

My guess is that this isn’t something that falls into the Communications purview, but it’s a critical tool that Communication can work on with whomever is managing it.

For example, during the last outage, whenever I called the customer care hot line, I was subjected to a recorded message telling me Pepco was experiencing high volumes of outages due to the storms in our area, blah blah.

Why not create an option for those affected to bypass that message and go straight to reporting the outage?

The last thing I want to be told, when I have no power, is essentially to keep calm and wait for the beep.

During the early stages of my “interview,” I was told that Pepco uses Radian6 to monitor Twitter.

Radian6 is great, but what it’s not going to do is engage for the company.

Before I spoke with Andre, I read a Washington Post article shedding light on Andre’s plight as the primary recipient of online frustration towards Pepco.

I know it can’t be fun having to monitor #pepcosucks.

No more than it can be to realize someone has actually turned this into a web page.

But why not start commenting on these posts… not just on Twitter, but on blogs as well, wherever you can?

No, you’re not going to change everyone’s mind. But at least it’ll show you’re paying attention. And showing people you’re listening is the first step to making them feel they’re being heard.

brand the Pepco Facebook page properly (which doesn’t have, at the time of this writing, any posts following August 12).

Andre, nice as he is, is not Pepco, and vice versa.

That’s not what I expect to see from a company the size of Pepco.

Why not incorporate that into the company’s domain (for example, pepco.com/blog – there’s an icon on the home page, but you can barely find it), make it a little more attractive (you can still use WordPress), and again… populate it more frequently?

If it’s too much of a hassle to re-engineer the domain (and I write this as a complete non-geek), secure a URL like PepcoPowersUp.com, or PepcoPower.com, or PepcoIsPower.com (in fact, I think you should do this any way).

They’re all available as of this writing (I checked).

There are any number of smart permutations of “pepco” and “power” with positive connotations that can be used.

Customize the theme using an inexpensive program like Headway, and boom, you’re off to the races.

Why not upload videos that don’t have such a produced feel more regularly?

This one, featuring Andre showing how to remove a battery from a thermostat is a start, but there’s so much more you could do.

Especially when a crisis hits, a Flip camera could be Pepco’s best friend, particularly to show how hard the team is working to get power restored.

Take short videos – they could be of teams on the ground, the Communication team (or Andre) responding to a comment a la Old Spice guy, anything.

By doing this frequently, people will actually see the Pepco team in action… and reduce the feeling they have of being in the dark.

6. Help your customers tell their stories.

No matter who we are, where we are, or what we do, we all love stories.

Why not tell Pepco’s story through its customers? Ask them to tell you their stories and then populate them on different platforms and cross-promote as above.

Are customers being creative while trying to save power? Did someone have a romantic candlelit evening instead of being glued to their laptops or TVs? Ask them. And tell that story.

Did a sudden power outage result in something pleasantly unexpected? Did they suddenly pay attention to the stars? Ask them. And tell that story.

Do you have a happy customer you helped out? ask them to send you a quick video. With their permission, post it. Tell that story. 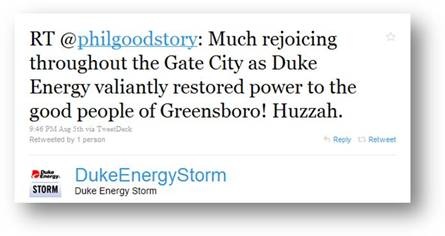 See, most of us don’t like being crabby all the time.

If a company does something nice for us – or helps us in some way – we want to tell other people.

So take advantage – in a nice way – of human nature.

In all the emergency communications I received during the last few power outages, my county’s system of using email and text alerts (both of which I’d signed up for) was impressive to me.

What was notable, however, was how not a single such communication came through from Pepco.

Consider implementing such tactics, as well as an email newsletter, which will fit in well with Pepco’s “green billing” initiative.

Pepco, you may already have thought of all this.

Consider this a free consult – in the public interest – from Shonali Burke Consulting.

What tips would you add, or have I gone bonkers? How are other companies handling crisis communication well in the age of social media?