I Want to Thank the Academy… a Language Rant 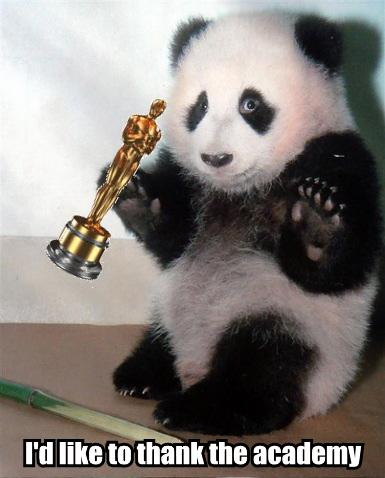 “I want to thank you for being here today …”

I don’t know about you, but people wanting to thank me/do things for me are starting to make me cringe.

I feel the same about those who say they “would like to” do things. Think about it and I’m sure it will bother you as well. In fact, if you think too much about it, you’ll see this everywhere.

You see, it’s like this. If you want to thank, want to ask me, want to invite me – then why don’t you just do it?

Quit beating around the bush. It will improve your writing and your communication skills.

My dear friend Ann Wylie talks in her writing workshops about giving our writing more impact. She purports the use of shorter sentences and getting to the point.

Others suggest an editing technique where you remove every five or seven words to make writing have more punch. Removing “want” from my writing/speaking is one way I’m trying to do this. I think Ann would approve … er, I think Ann approves.

Even Steve Jobs’ commencement speech to 2005 Stanford graduates included the phrase: “Today I want to tell you three stories from my life.” It’s interesting to think Jobs needed the comfort of asking their permission to tell the stories that formed his career.

Former President Jimmy Carter, in a speech televised in 1979 used “I want to” three times in his speech.

“So, I want to speak to you first tonight about a subject even more serious than energy or inflation. I want to talk to you right now about a fundamental threat to American democracy.”

These two sentences have more punch if they are edited:

“So, I want to speak to you first tonight about a subject even more serious than energy or inflation. I want to talk to you right now about This is a fundamental threat to American democracy.”

Finally, from a scene from The Godfather, a classic from 1975:

Don Corleone: [dismissive] “I have a sentimental weakness for my children and I spoil them, as you can see. They talk when they should listen.

“Anyway, Signor Sollozzo, my no to you is final. I want to congratulate you on your new business and I’m sure you’ll do very well and good luck to you. Especially since your interests don’t conflict with mine. Thank you.”

Think if the mob boss had instead said this:

“Congratulations to you on your new business. I’m sure you’ll do very well and good luck to you.”

Removing words that seem to ask for permission to speak directly increases the impact of our words. There often isn’t a need for an introductory clause. And using them tends to make us seem less self-confident and more vulnerable.

On the surface it seems I’m advocating for simpler declarative sentences. I don’t really care what it’s called. I do know I want people to be less wishy-washy.

If you want to thank someone … and are giving a speech … say it. “Thank you for being here today.” See how nice that sounds?

Do you have a language pet peeve? What do you wish people would work on?

Mary Deming Barber, APR, Fellow PRSA, runs a strategic consultancy in Anchorage, AK, where she helps clients understand how to integrate new media into traditional communication programs. Mary has counseled clients in Anchorage, San Francisco, Oregon, and Colorado for more than 30 years working with variety of food organizations, several agencies, and as a key team member on two successful US Senate campaigns. She also blogs.