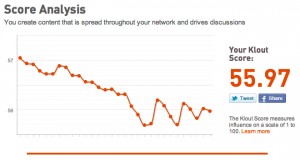 I’ll admit that it’s fun to bash Klout. They are on the front lines of the Wild West of determining influence, and who is doing that influencing, online.

Posts have been written ad nauseam (including on this blog, though they’re not the nauseating kind) on the plusses and minuses of Klout’s service, but I think I’ve finally nailed down what bothers me about the service (which I’m still a member of and will continue to use).

I have the belief that, despite what Klout says, it ties a large part of how “influential” you are directly to how much you tweet.

See that picture to the right (up there, no… there, that’s it)? That’s my Klout score over the past several weeks.

I’ve been busy this summer with a large project at work, moving into a new house, and preparing for the birth of our first child (due August 20th, and that date may or may not be circled in red marker with glitter all around it.), and you know, just enjoying summer with friends and family.

Because of that, my score has dropped from the ballpark of 62 this spring to 56. I’ve been tweeting less.

To put my suspicions to the test, I spent a few days last week tweeting incessantly and then going quiet. You can see in the picture above the spikes of when I was tweeting.

Here’s the question: am I less influential than I was in March? Do my ideas and thoughts matter less? Are they less valuable to my audience simply because I’m not tweeting as much?

I don’t think so. And here’s proof: although I don’t believe the number of people who follow me on Twitter to be incredibly important, that number has continued to steadily rise during the same time my Klout score has dropped.

I have to believe that if I was truly less influential than I was in March, my follower number would have dropped at a similar pace. Are there peaks and valleys to that follower growth? Of course. Generally speaking, that number has inclined while my Klout score has declined over the same period.

This is the main reason I just can’t take Klout incredibly seriously. I think it can be a valuable service… but for that to be the case, its algorithm must be tied more to content than frequency. Clearly, that isn’t the case right now and I think that’s a shame.

I realize Klout is relatively young and has a long way to go to mature as it fine-tunes its product. For the time being, it remains a game as far as I’m concerned, and not one I can advise my clients to pay any real attention to.