We Make Our Own Fairy Dust 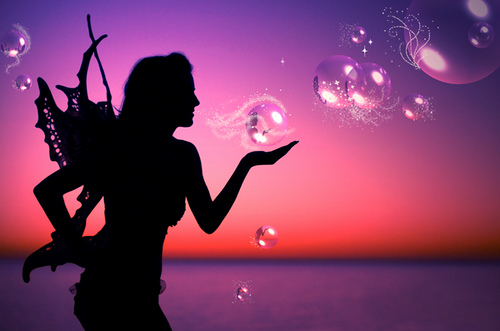 The one thing that I’ve realized is that in business and life, there is no such thing as fairy dust.

Scratch that. There is; but we make it ourselves.

A few weeks ago, I was on the receiving end of an “I’m going to the garden to eat worms” type of message from a friend.

She was down in the dumps about business, it just wasn’t as groovy as it had been a few years ago. She was worried about being personally affected by the sequester, and was seriously considering taking a J-O-B. Would I talk her out of it?

Hells yeah. I shot her a note and called her (without even checking to see if it was a good time for her to talk). I said,

“What’s wrong with you?! You have more talent in your little finger than most people have in their entire bodies. Every time I get one of your email newsletters, I say to myself, WTF, Shonali, couldn’t you come up with something half as good as that?

“Stop feeling sorry for yourself and go work those connections you have. If you don’t, I’m going to show you what your first-born chopped in half might look like, and you’ll have to choose which half to save.”

OK. I didn’t say all that. And obviously I didn’t threaten to dismember her child, who is a wonderfully sunny person.

I did, however, kick her butt and tell her to get herself in gear. I told her she needed to set up some kind of new business process by which she could hold herself – and her business – accountable. I shared some of my own systems and tools with her (some of which I’ve shared here, like Streak) and said, “If I can do it, you can.”

Lord love me, if I’ve heard this once, I’ve heard it a million times. I used to say it myself… all the time. And now that I’ve gotten over it for myself, I hear it especially from women business owners.

We don’t like being aggressive, we don’t like being sales-y. Forget about trying to lean in, we’re too busy leaning out of the way of anything that could happen to us, especially if there is fiscal risk associated with it.

I told her the same thing I’m telling you now, if you’re one of those people: we are all in sales. All of us. Especially those in public relations. Some of us just don’t realize it.

Get media and bloggers to consider and, sometimes, write about stories they might not otherwise have considered, or even known about.

If that’s not sales, what is?

Of course, there are some sales techniques that make us all – ok, most of us – barf. For example, I’d hate to be a telemarketer (but, if I had to be one, I’d be the best friggin’ telemarketer out there), for example. I really feel for those poor people. Think they don’t know calling us at dinnertime sucks? Of course they do! They’re just trying to do their jobs.

Extreme situations aside, though, there is a sales aspect to a lot of what we do. And there’s nothing wrong with recognizing, or reveling in that. Fortunately for me, I’ve come to realize it, and I absolutely love business development.

“A rose, by another name, would smell as sweet…”

So anyway, I did the best I could to convince my friend she just needed to refocus her energies and think long and hard about what makes her happy. If she really wanted to, she should take the J.O.B., but not for the wrong reasons. It might be an “easy” living, but would the increased commute and lack of independence really be worth it?

A couple of days ago, I asked my friend how things were going. She said,

“I’m doing great. Things are coming together. I’m SO relieved I didn’t take that stupid job.”

At which point I joked I should take credit for her not taking “that stupid job.” To which she replied,

“Things have gotten fantastically busy over here. I think I’ve figured out that I need to play a bigger game – much thanks to you for helping me see that. It’s been a banner week!”

The reveal and unanticipated outcome

My friend is the wondrously talented Ann Bevans of Bevans Group, LLC. I have to thank Mike Dougherty for introducing us many years ago; since we met, Ann has been one of the people I’ve really enjoyed getting to know more and more. She is talented, creative, thoughtful, and honest. That’s a lot for one person to be… and she’s the real deal.

An unanticipated outcome of this call was that my friend – who is an exceptionally talented web designer and digital communicator – started helping me with a few tweaks to my site and blog. Paid, of course, so now she is my official webmaster, which I’m very happy about. So, while my company isn’t a huge piece of business for her, it’s something. And something is usually better than nothing.

We have pitched at least one piece of business together. I still don’t know if we’ll get it, but it was a great way to get a feel for each others’ styles, and how we might work together. And more will come.

So when I saw her post on fairy dust (that I linked to at the start of my post), I asked her if I could take credit for it.

She said,“You MUST take credit for it. I’m so glad I reached out to you.”

All of this is not to make me out to be Glinda the Good Witch. I’m far from that.

But what I do know – having learned and, sometimes having to relearn, the lesson – is that no matter how much we may love fairy tales (and I love me some fairy tales), the only fairy dust around is the one we make for, and sprinkle on, ourselves.

So get out there and work it. And Happy International Workers’ Day.