Why Do You Blog? 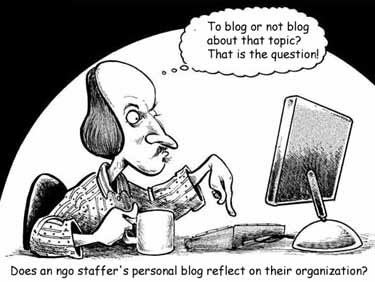 My friend Joe Hackman had a nifty post the other day asking, “Why do you blog?”

As you can tell, I couldn’t think of a better title, so I “borrowed” it from him. Thanks, Joe!

As tends to happen sometimes, my response could have been a blog post in itself, but this is what I said:

“I was having a Twitter conversation via DM with a ‘thought leader’ on the controversial post of the day. [Note: this is going back about 2.5 years ago.]

“At the time, I had guest-posted once, maybe twice, but didn’t really know if I could blog (who would care, etc. etc.). The next couple of days, I saw almost my words represented verbatim in this person’s blog… as that person’s own comment.

“Now, fair enough, a lot of people can think and say the same thing, but it struck me as a little odd that there was not even any attribution, e.g. ‘I was talking to so-and-so on Twitter and it made me think this’ (though even that wouldn’t be correct attribution, since it would still appear as if that thought was the other person’s and not mine… but it would have been something.

“That pissed me off. So I started blogging.

“[Since then] I’ve become more confident about writing, and growing a blogging team has been (and continues to be) an absolute joy – thank you Howie Goldfarb, Bryce Keane, Erica Holt, Herwin Icasiano, Shanan Sorochynski, Narciso Tovar and SO many more newer WUL team members!

“I like to talk (as you know from Twitter, Amplify, Facebook, et al). A blog is a great place to do that, and I’ve come to enjoy it immensely.”

What I shared with him, and now you, was indeed the catalyst that made me get off my butt and start this blog… and now I’m blogging in three places on a regular basis, with the occasional guest post here and there.

But I would never have thought I’d be doing this, if you’d asked me three or more years ago.

While it was irritation that got me to start this blog sooner than I might have otherwise, there was other stuff as well, as I’ve probably mentioned before: who would care what I wrote?

Would anyone read it? And the most worrying thing of all: should I, as a PR professional, really be blogging instead of focusing on my clients?

Well, as we’ve seen, I got over all that soon enough. And while it’s still stressful (I get very stressed if I don’t have a post or two in the offing), I love the ultimate product.

It’s not perfect, but it’s what I got.

I love growing a team of guest bloggers who are, I think, as invested in WUL as I am.

And I love hearing from all of you, whether it’s on Twitter, Facebook, via a comment, or an email. I truly do. It makes me feel that I’m making a difference to someone’s day.

At the end of the day, I guess there are two basic reasons anyone blogs:

2. It makes other people happy.

“Happiness,” of course, could mean a lot of things. It could mean it satisfies you (as it does me), and it could mean that it brings some light into someone else’s day.

Perhaps this “light” takes the form of information, or entertainment, or maybe it’s a refuge, a place people go when they need to lose themselves or take a break.

Are there business benefits that come with blogging?

Absolutely, though I never thought of that when I started out.

Particularly since I teach and speak a lot about integrating social media into overall communications, blogging gives me at least some level of street cred.

It adds a dimension to my resume that I otherwise wouldn’t have, and yes, I get business and speaking inquiries because of it.

I’ve also come to believe it’s just about the best thing any public relations professional can do – not just for themselves, but for an understanding of how communication in today’s world works, that translates into benefits for their clients/organizations as well.

It is probably the best marketing tool I have for myself, since it tells people (I hope!)

that I care about the state of public relations;

that I care about how they can use smart public relations to support and/or reach business objectives;

that I try, as much as possible, to keep up with the changing face of digital communication.

And if you don’t but want to, what’s holding you back? Is there something we can help with? Please do tell us!