Perhaps it was an episode of Extreme Couponers or the explosion of social commerce sites such as Groupon that sparked my addiction to a good deal, but either way, I’m hooked on them.

One night in February I was perusing Groupon and found deals galore capitalizing on the upcoming holiday. As any good female friend should do, I reminded my clueless friend Steve that Valentine’s Day was around the corner.

Steve had been dating his girlfriend for a couple months and neither of them struck me as the typical flower type; so I was thrilled to have found what I thought was the perfect Valentine’s Day deal for him – Fancy Fortune Cookies.

I had never seen anything like it. The company offered an assortment of fortune cookies of all sizes stuffed with your own custom fortune. I quickly convinced Steve that this was an awesome idea.

That is until I received an email on February 13 at 4:30pm stating the following: 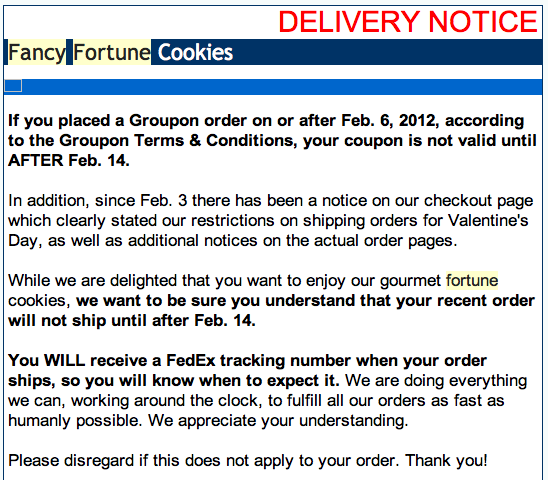 I thoroughly read the Groupon terms to make sure this coupon was valid when I needed it. I even emailed customer service and was told my order would arrive on time.  By the time I received this delivery notice,Valentine’s Day was less than eight hours away.

I was frustrated and concerned.

I promptly contacted Fancy Fortune Cookies via email and followed up with multiple unanswered phone calls. Desperate for answers, I did what any customer in 2012 would do and looked to Facebook and Twitter. Hopefully I could at least determine whether other customers were experiencing the same frustration.

To my dismay I found their Facebook wall was disabled.

Without saying a word, Fancy Fortune Cookies told myself, and every other customer that visited their page, that they didn’t care what any of us had to say.

As a digital communication professional, I resisted the urge to call them and ask why they even had a Facebook presence to begin with (mainly because I realized no one was going to answer anyway).

Two days later I finally received a call back from a nice, apologetic woman. She explained that they were a small family business and that Groupon had actually misunderstood their offer dates, posting them incorrectly.

The result? They were overwhelmed with calls and a flood of customers they weren’t prepared to handle.

To the small business owner, Groupon might seem like an easy solution to drive business and increase sales.

According to this New York Times article, most businesses make very little money off the deal (if any at all). “On average, a business only sees about 20 to 25 cents on the dollar of retail value,” says author and business owner Jay Goltz.

I hate to see small businesses suffer by blindly falling victim to the seemingly innocent Groupon curse. So what can they do?

“I want to bring in more customers and make more money.” Seems simple, right? But in order to attain this goal you need to come up with a concrete business objective and work backwards to figure out your strategy.

Then ask yourself, is Groupon a cost effective and ample approach to reach my objective?

2. Know what you’re getting into

Before calling Groupon, do your research, know how they work, learn from the mistakes of others and make sure you agree to, and can handle, every contract stipulation. If not, it’s time to bargain.

Remember, social commerce sites are only as good as the product or services they sell.

3. Prepare for the worst

My mom used to always say, “when you least expect it, expect it.”

A small business should not only expect but be ready for an influx of inquiries. Have extra staff on hand or on call, especially  customer service representatives (and I mean trained customer service staff, not just your neighbor down the street).

Make sure your staff is listening and responding efficiently via email, phone and online. A while back, Shonali said it best: “You need to prepare for a Groupon deal like it was a crisis.”

Your responsiveness will be the difference between losing a customer and gaining an evangelist. And for goodness’ sake, if you have a Facebook Page, your Wall better be enabled and you better be monitoring it!

Let’s face it, most people buying Groupons are just looking for a good deal. The likelihood these couponers will pay full price to return is low. At the same time, this is your opportunity to prove to these new customers that your product or service is worth it.

If you’re an upscale restaurant, you want these new customers to have such an exceptional experience; they decide to return for their next special occasion. If customers walk away recommending you to others, you’ve won.

How will you follow-up with your new customers after they’ve used their Groupon? This goes back to planning.

If you’re an online business you should track who used a Groupon and contact them to see if the product met their expectations. If you’re a service you could ask that the Groupon users fill out a comment card to capture their information before leaving. The idea here is people want to feel like you care about them individually, even if they used a coupon.

So reach out, learn from these new customers and make them feel special. 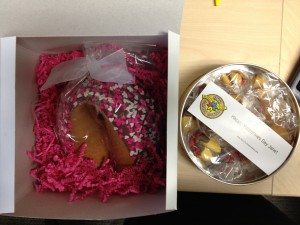 For Steve and his girlfriend this story actually has a happy ending.

He sent me a picture text message: “She got her cookies. Loves them. Said it’s bigger than her head! Thanks Rachael!”

While Fancy Fortune Cookies offers a unique and quality product, it’s unfortunate their customer service failure ended our relationship before it even started.

After all, if the cake is bad, what good is the frosting?

As for Groupon – in 2010 Gini Dietrich said, “I think Google launches their own local online coupon model, Groupon decreases in value, two or three competitors gain steam on them, and $6 billion is lost forever.”

At some point lying, arrogance and greed catches up to you. I think the time has come for Groupon; perhaps it’s karma?

What do you think small businesses need to know before participating in social commerce sites like Groupon? And is it a good idea from a public relations and marketing standpoint? Why or why not? Any thoughts on the once fastest growing company’s 15 minutes of fame?

Rachael Seda grew up barefoot in Hawaii. Determined to find a career that put her creativity and social skills to good use, she double majored in communication and media arts and design at James Madison University and set out to do just that… and is now an Account Executive at CRT/tanaka. She shares her career experiences and journey at rachaelseda.com. Her ultimate weakness is cheese.