“No” is Not a Dirty Word 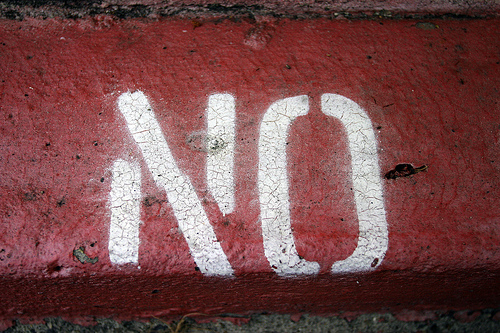 Nothing earth-shattering about that. It’s pretty much a rule of thumb for business in general.

And as an independent, it’s very tempting to say “yes” to every business opportunity that comes my way.

I suspect it is for you too.

After all, we have to pay the bills, put food on the table, etc., too.

Now, this wasn’t a small opportunity.

The potential client seemed to have significant dollars to invest in outreach, and what could be a pretty impressive service and campaign, if everything worked out.

Because while the money was tempting – and money is always tempting – I felt the PR expectations were unrealistic.

In my opinion (and really, that’s the most important thing when it comes to deciding whom to work with), the service was still in an extremely conceptual phase.

That’s fine. After all, everything starts somewhere, right?

But the potential client didn’t realize, or accept, some of the building blocks that would need to be put in place before I could confidently start promoting it.

And no matter how much money I am paid I try, as much as possible, to set myself up for success, rather than failure.

I’ve said it before, and I’ll say it again, “PR” is not just about press.

It’s about being able to tell your story (or your client’s/organization’s) story in a way that will inspire action.

That action being the outcomes that you want to achieve for your business, be they financial or otherwise.

This means that “good PR” begins way before your service or product hits your market. It begins when you’re figuring out your story, and you accept your PR counsel’s insight in doing that.

Press releases, pitching, blogs, social media, grassroots outreach… all these (and more) are ways to get there.

But if your story isn’t completely written, in a manner of speaking, and well-thought out, what chance do you have of actually getting there?

By doing so, I relieved myself of the stress that I knew in my gut would come along with the project; the hair-tearing, the crazy phone calls at all hours, in short, the drama.

And I gave myself the gift of acquiring the kind of clients I want to say “yes” to.

As a former dramatis personae, I love drama.

And we all encounter it in our work; I certainly don’t shy away from it, or dealing with it, when I have to.

But to go in, knowing it would be drama from the get-go?

I’ve learned that “no” is not a dirty word.

It’s not necessarily nasty, or mean, or selfish.

It certainly can be all those things.

But sometimes it’s necessary to say “no” for one’s sanity, self-preservation… and success.

Sometimes, we say “yes” simply because we’re tired of saying “no.”

Or because we’re anxious.

Or because we’re so used to saying “yes,” we’ve forgotten what it feels like not to.

Doing something simply because someone else wants you to is not a good enough reason to do it.

Especially when your reputation is on the line.

And like business, PR is about relationships and reputation.