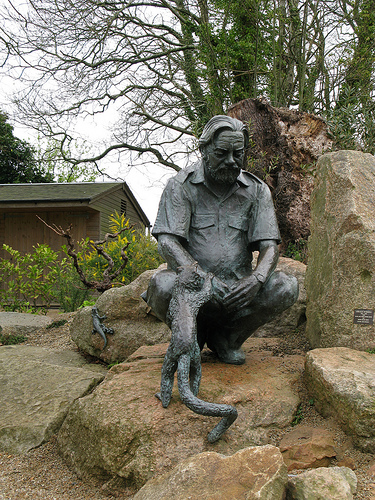 I don’t know if you’ve read My Family and Other Animals by Gerald Durrell; almost everyone I’ve asked in the States hasn’t.

What a cast of characters.

The genius writer brother; the gun-crazy brother; the beauty- and romance-obsessed sister; the fiercely protective Greek Man Friday; and the food-obsessed and long-suffering mother (or Mother, as she’s referred to).

Not to mention a whole host of plants, insects and animals.

It’s a great book, not just because it’s hilarious, but because it’s wonderfully evocative and, despite the crazy antics described, clearly a loving depiction of an unusual family.

All of which is not to say

any of the writers highlighted below are crazy, gun-obsessed or long-suffering (actually, they might be long-suffering, but I have no way of knowing that).

But they’re all great, and they’re starting to feel like a family to me.

Do go have a read.

1. The feline theory of public relations, by Richard Bailey.

Why: with a headline like that, you think I was going to pass it up?

2. Super Sunday: are you ready for some… advertising! by Davina Brewer.

Why: even though I plan not to watch the Super Bowl, Davina might make me change my mind.

3. “Social media” or “social networking” – which term is correct? from Mizz Information.

Why: I don’t know why we need to quibble over these things, and I liked Maggie’s answer.

4. Where to use keywords in corporate blog posts, by Lee Odden.

Why: the thing I like so much about Lee is that not only does he know so much, he shares so freely.

5. Trying to figure out Quora? Me, too! by Bill Sledzik.

Why: I haven’t come to terms with Quora myself, so it made me feel better that Bill – who is no dumb ass – hasn’t either. Plus it’s a great read.

6. 3 ways to get great content from your boring business, by Shannon Paul.

Why: I’ll give you a hint: three reasons in the headline, and the fourth is the author, whom I â™¥ big time.

Why: I trust Paul. That’s why I read him. You should too.